Glowing water in the Maldives

The most amazing places in the world can be found in popular holiday destinations, the main thing is to know where and when to look. The Maldives is a heavenly place, but you may not know about one of its facets yet. In the Maldives, a unique “starry sky” appears right in the ocean! This happens thanks to the luminescent plankton that inhabits the waters off the island of Vaadhoo. Incredible place! 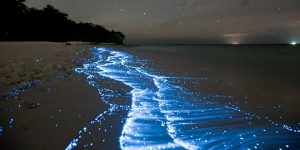 It usually begins to glow in stressful situations of its planktonic life, for example, during the surf or at night. But keep in mind that it is better to refrain from swimming at this time, because phytoplankton can release toxic substances.

And this multi-colored geological formation has long earned the glory of one of the most beautiful places in the world. The dunes are located at the cone of an ancient dormant volcano in the Lassen National Park.

Their unusual colors appeared due to the oxidation of the ash that settled directly on the lava flows during the eruption.

The United States is very rich in its natural resources, and therefore the most unusual places in the world are concentrated here in huge numbers. The American artificial Fly geyser would be more correctly called a permanent thermal source, because one of the signs of a geyser is inconstancy. 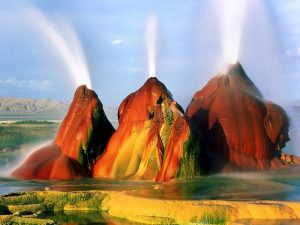 Once a well was drilled at this place for a well, after it stopped functioning, natural reactions began underground, which led to the formation of this miracle.

This Irish landmark also appeared due to volcanic intervention. Thanks to an eruption that took place many centuries ago, 40,000 basalt columns appeared here, going into the sea, like steps for a real giant. 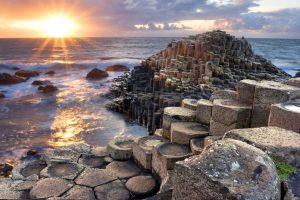 In addition to, in fact, walking along the columns, it will also be interesting to climb up and survey the picturesque panorama. In addition, there is an opportunity to rent (or come on an already rented) bike and ride along the equipped route around the area.

Listing the most unusual places in the world, one cannot help but recall the Salar de Uyuni. The natural pearl of Bolivia, Uyuni is a saline, that is, a dried-up salt lake. It becomes a real miracle of nature in the rainy season. Covered with a thin layer of water, the salty surface turns into the largest natural mirror in the world. On a fine day, this “mirror” reflects the clear Bolivian sky and the place becomes even more fabulous.