There are mysteries of nature in the world, and many human tragedies, mystical and terrible events are associated with them.

The Bermuda Triangle, the most mysterious and sinister place in the Atlantic Ocean, has been talked about for hundreds of years. But it seems that even modern science with its incredible achievements cannot unravel this phenomenon. Famous scientists minds fought over the secrets of the Bermuda Triangle.

However, the matter did not go further than bold hypotheses. Even Christopher Columbus and his brave team, once on a ship in the Bermuda Triangle zone, felt something was wrong. For no reason at all, the compass needle jumped, and some strange light loomed ahead. Fear on the team caught up with a sheaf of fire that fell into the ocean waters. Columbus did not tempt fate and under full sail sped away from this accursed place. 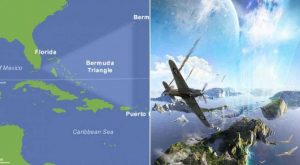 The Bermuda Triangle continued to haunt the world with tragic stories. In this regard, Christopher Columbus was still lucky, which cannot be said about the French ship Rosalie, which was discovered in November 1840 off the Bahamas. Everything on the ship was intact and in perfect order, only the crew was missing. The only living soul – a canary, weak from hunger, of course, could not tell anything about what had happened.

Already today, with some diabolical constancy in the area of ​​the Bermuda Triangle, steamships, yachts and even motor boats continued to disappear. And even in the last century, planes began to disappear.

For example, on December 5, 1945, a link of five American combat vehicles disappeared without a trace in the Bermuda Triangle.

The ocean stubbornly kept its secrets, not surrendering to the mercy of man. And it seemed that you could shout “Eureka!” in our favor when, in 1992, American scientists discovered at the bottom, right in the center of the Bermuda Triangle, a huge pyramid. And immediately everyone started talking: here it is – the long-awaited solution to the maritime tragedies, from here, they say, evil comes. But scientific analysis showed that we again stumbled upon another mystery.

The stones of the pyramid were carefully polished by someone and did not pose any danger. On the wave of rumors, an absurd version was born: they say, all this is the work of Atlantis, which disappeared under water, and its underwater inhabitants. Then another came into being: the Bermuda Triangle is a gigantic funnel that engulfs even gigantic ships with terrifying speed. Seismologists have refuted this claim.

Now it is difficult to say when we will unravel the sinister mysteries of the Bermuda Triangle. As before, this place in the Atlantic Ocean fills people with fear and horror.

Probably any self-respecting Englishman is proud of this attraction. Stonehenge is a unique and mysterious building literally a hundred kilometers from London – it can be said to be a national relic that causes a patriotic tear of tenderness even in a high-ranking gentleman. After all, from childhood he believed in a fairy tale that the great wizard Merlin on his mighty shoulders dragged huge stones from Ireland to build a giant circular fence of blocks.

The history of the origin of Stonehenge is a favorite topic for heated debate among archaeologists, theologians and even ufologists. Which side the latter turned out to be here is indicated by the fact that the appearance of a UFO was noted in the area of ​​\u200b\u200bthe structure (read also: 17 places in Russia where you can see UFOs). And more than once. It is possible that the alleged aliens have their own long-standing interest in Stonehenge.

In the meantime, scientists are struggling over every stone of the mysterious structure, trying in vain to explain the phenomenon, how did ancient people manage to build it? And gradually they come to the conclusion that the matter could not have done without the intervention of otherworldly forces. However, only one thing was known: in the Neolithic era, this monument served as a burial place for people. More than fifty human remains have been found here.

The Scots almost declared war on the prim English, already trying on combat kilts, when they found out what kind of dirty tricks their neighbors were preparing for them. In 1933, the British suddenly got the idea to finally find the Loch Ness monster, slaughter it like a whale, to death, and exhibit the carcass at the Natural History Museum in London. And there was no limit to the indignation of the Scots, who were simply enraged by the monstrous idea of ​​the British.

They all stood up as one to protect the unique inhabitant of the lake. They were not even embarrassed that they had never even seen this monster in their eyes. In truth, the Loch Ness monster has long been a national pride, a fun of the imagination of many generations of rugged Scotland. The British retreated from their idea. They considered that it was more expensive to get involved with the warlike Scots.

“Nisag” – so called the ancient Celts, according to some historical sources, the mysterious inhabitant of the lake. Modern residents call him by the gentle name of Nessie. Scientists are still tormented by scientific torment: is there really this monster?