Bale’s cryptograms are three encrypted texts that supposedly carry information about the location of the treasure: thousands of pounds of gold, silver and precious stones. The treasure was allegedly buried in Virginia near Lynchburg by a party of gold miners led by Thomas Jefferson Bale in 1818.

It is known that for the first time information about the “treasures of Bale” appears in 1865, along with the publication of a pamphlet by an unknown author, the full title of which read as follows: “The Bale papers or a book containing true facts regarding a treasure buried in 1819 and 1821 near Bufords, Bedford County, Virginia, and not found to date.” The publisher was James Beverly Ward, who provided the manuscript to the Library of Congress, where it is kept to this day.

The author preferred to remain anonymous, explaining this by a desire to protect himself from the persistent attention of the press and potential treasure hunters. The pamphlet was produced by Virginian Book in Lynchburg, Virginia, and was priced at 50 cents.

Cryptograms 1 and 2 were deciphered by the author of the pamphlet. Cryptogram #1 described the exact location of the cache, and cryptogram #2 was a listing of its contents.
The third cryptogram, which allegedly contained the addresses and names of potential heirs, has not yet been read. The mystery of cryptograms has not been solved so far, in particular, the question of the real existence of the treasure remains controversial. 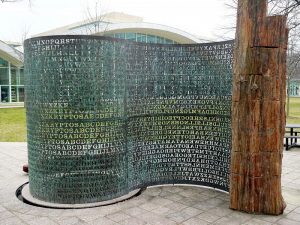 Kryptos is a sculpture with ciphered inscriptions created by artist Jim Sanborn. The sculpture is installed in front of the CIA headquarters in Langley, Virginia.

November 3, 1990 – the date of installation of the sculpture. From that moment on, attempts to decipher the mysterious message do not stop. The contents of three of the four tables have already been revealed, but the remaining last table, containing 96 characters, remains an unsolved world mystery …

Greg Hodgins, a University of Arizona chemist and archeometrist, determined that the parchment for the manuscript was made between 1404 and 1438 during the early Renaissance, based on radiocarbon dating of four fragments of the manuscript.

The manuscript has been intensively studied by cryptography enthusiasts and cryptanalysis professionals. Neither the entire manuscript, nor even part of it, could be deciphered. A series of failures turned the manuscript into a well-known subject of cryptology.

In the world today there are many theories about the nature of the origin of the manuscript. Some believe that this is a textbook on pharmacology. Other researchers believe that the drawings of plants point to a textbook on alchemy. The fact that many of the diagrams have astronomical content, combined with unidentifiable drawings of biological life forms, suggests an extraterrestrial origin for the unusual manuscript. None of the assumptions has received unambiguous confirmation and recognition in the scientific community.

The book bears the name of the antiquary Wilfried Voynich, who acquired it in 1912. In 1959, second-hand book dealer Hans Kraus bought the manuscript from heiress Ethel Voynich for US$24,500 and donated it to Yale University’s Beinecke Rare Book Library in 1969.