Even now, many years later, the US military remains completely silent about the infamous Philadelphia experiment. Later it will receive a different name – “Rainbow”. The destroyer “Eldridge” was supposed to go down in US history in 1943 as an object where, for the first time in the world, secret work was carried out on human teleportation.

The project of Dr. John von Neumann promised tempting prospects for the military: the creation of an invisible warship – a kind of “Flying Dutchman” – radically changed the situation in the world. True, secretly each of the high-ranking participants in the experiment was aware that the risk was very high. But this did not prevent them from giving up on the fate of the crew of the destroyer Eldridge.

The first experiment took place on July 20, 1943. Two huge electromagnetic generators installed on the destroyer produced an unexpected and quite expected effect. 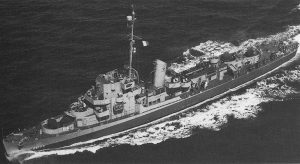 The entire crew, along with the ship, disappeared from sight for fifteen whole minutes. The success inspired the project leaders. Ignoring the state of the team, the experiment was repeated again. But then something went wrong. And the work in an emergency order decided to curtail. The destroyer was urgently towed. Everything was done in the strictest secrecy.

But you can’t hide an awl in a bag: it became known that no more than twenty sailors survived during the experiment. It was a handful of survivors from a crew of almost two hundred people. When the “lucky ones” returned home, they were unrecognizable. They looked very strange, lost their memory. They say that one of the sailors completely disappeared in front of his relatives. He went through the wall – and seemed to fall into the ground. Nobody saw him again…

This story is so overgrown with rumors that you start to get confused where is fiction and where is the truth. According to some reports, which often come from the lips of ufologists, the Martian little finger appeared in the Ural village of Kaolinovy ​​near the town of Kyshtym for a reason. And even, perhaps, with a specific mission. But Alyosha, as the compassionate resident of the village Tamara Prosvirina called him, apparently knew nothing about this. And the elderly woman was glad-radehonka that she found an incomprehensible creature about 20 centimeters tall near the local cemetery.

He was, by our standards, a real freak: instead of ears – holes, his mouth was a gap with two teeth inside. There was no navel on the tiny body of incredible whiteness, the eyes, as if they were in the depths of the head, were constantly open. However, the woman doted on her pet and fed him only honey, milk and condensed milk.

Of course, the strange behavior of Tamara Prosvirina did not go unnoticed by the neighbors. In general, she ended up in a psychiatric hospital, and each meeting with the doctor ended in tears of a woman who constantly repeated that Alyoshenka remained unfed at home …

While the woman was in the hospital, a thief snuck into Prosvirina’s house and found a dead freak who had already turned into a mummy. Without thinking twice, he took her with him. The police, who once raided his house, racked their brains for a long time: why did the thief keep the mummy in the refrigerator? Aleshenka, who fell into the hands of local criminalists, became the subject of careful research. And it turned out that he was not a man, but a representative of an extraterrestrial civilization. Thus was born the legend of Alyosha Kyshtymsky – a boy with a finger from an unknown planet.

However, this version was met with hostility by scientists. They unanimously argued that, apparently, the “alien” was a real person and suffered from progeria – premature aging. And as an example, they cited the case of one Belarusian girl, who at the age of 26 turned into a dilapidated grandmother.