Voynich Manuscript. Named after a Polish-American antique books dealer, the Voynich Manuscript is a detailed 240-page book written in a completely unknown language. In addition, its pages are filled with colorful drawings and strange diagrams, images of incredible events and plants that are unlike any known species. 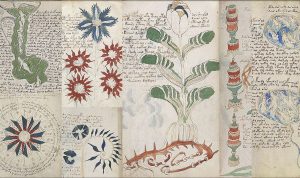 There are no inscriptions or drawings on the cover of the book. The page dimensions are 16.2 by 23.5 cm, the thickness of the book is 5 cm. The text is written with a goose quill ink based on gallic acid iron compounds, they also made illustrations. The illustrations are crudely painted with colored paints, possibly after the book was written.

The author of the manuscript is unknown, but radiocarbon analysis has shown that its pages were made somewhere between 1404 and 1438. The manuscript has been called “The most mysterious manuscript in the world.”

There are many theories about the origin and nature of the manuscript. It is considered by some to be a pharmacopoeia describing the various knowledges of medieval and early modern medicine. Many pictures of herbs and plants also suggest that he was something like a textbook for alchemists. The fact that many of the diagrams depict unknown astronomical phenomena led to the belief that the book was of extraterrestrial origin.

But one thing almost all theorists agree on is that this book is hardly a hoax, given the amount of time, money, and meticulous work it took to create it.

Take a look at the 18th century Shepherd’s Monument in Staffordshire, Britain, from afar, and you might mistake it for a sculptural reproduction of Nicolas Poussin’s famous painting, The Arcadian Shepherds. But look closer, and you will notice the strange sequence of letters DOUOSVAVVM – a code that has not been deciphered for more than 250 years.

Although the author of this cipher remains unknown, some believe that this code may be a clue left by the Knights Templar regarding the location of the Holy Grail. Many of the world’s greatest minds have tried to decipher this code and failed, including Charles Dickens and Charles Darwin.

Considered one of Australia’s biggest mysteries, the Tamam Shud case revolves around an unidentified man who was found dead in December 1948 on Somerton Beach in Adelaide, Australia. Apart from the fact that the man was never identified, the matter became even more mysterious when a tiny piece of paper with the words “Tamam Shud” was found in a secret pocket sewn into the man’s trousers.

This phrase translates as “finished” or “completed” and is used on the last page of the collection of poems “Rubaiyat” by Omar Khayyam. In addition to this mystery, a copy of the Rubaiyat was soon found, which contained a strange cipher, supposedly left by the dead man himself.

Due to the content of Omar Khayyam’s poems, many believe that this message was a posthumous note of some kind, but it still remains unsolved.