Rongo-rongo is a system of mysterious records that was discovered on Easter Island in the 19th century. Rongo-rongo is believed to represent a lost writing system or proto-writing.

The first mention of Rongo-rongo was found in a letter from the monk Eugene Ayrault, who arrived on Easter Island on January 2, 1864. 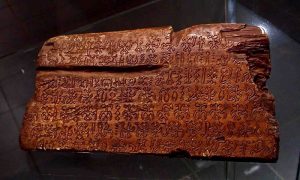 Numerous attempts to decipher Rongo-rongo were unsuccessful. Perhaps their decoding would give an answer to the main mystery of the island – the purpose of the giant statues of Easter Island.

Several dozen wooden items with Rongo-rongo inscriptions have been found on Easter Island. Now they are exhibited in museums around the world, some of them are in private collections.

The Georgia Guidestones are a granite monument sometimes referred to as the “American Stonehenge” (which leads to confusion with the Indian structure of the same name).

The height of the monument is more than 6 meters; it consists of six granite slabs with a total weight of about 100 tons. One plate is located in the center, four – around it. The last slab sits on top of these five slabs, aligned according to astronomical events.

Erected in Elbert County, Georgie in 1979. The stones are engraved with inscriptions in 8 languages: English, Spanish, Swahili, Hindi, Hebrew, Arabic, Chinese and Russian. Each inscription contains one of the 10 “new” commandments of the “Age of Reason”.

1. May the earthly population never exceed 500 million, being in constant balance with nature.
2. Regulate fertility wisely, appreciating the value of life preparation and human diversity.
3. Find a new living language that can unite humanity.
4. Show tolerance in matters of feelings, faith, traditions and the like.
5. Let just laws and an impartial judiciary stand up for the defense of peoples and nations.
6. Let each nation decide its internal affairs by itself, bringing to the world court only nationwide problems.
7. Avoid petty lawsuits and useless bureaucrats.
8. Maintain a balance between individual rights and social obligations.
9. Above all, value truth, beauty, love, striving for harmony with infinity.
10. Do not be a cancer for the earth, leave a place for nature too!

Although the monument itself does not contain encrypted messages, its purpose and origin are shrouded in mystery. The monument was erected by a man who is known only under the pseudonym “R.K. Christian”.

Among the 10 commandments come across very controversial. For example: “To maintain the human population of 500,000,000 in constant balance with nature.” Some conspiracy theorists even believe that the commandments were designed by some secret society to create a new world order.

Zodiac is a serial killer active in Northern California and San Francisco (USA) in the late 1960s. The identity of the offender has not yet been established.

Zodiac is an alias used by the killer. He sent scathing and brash letters to local newspapers. In letters, he sent cryptograms in which he allegedly encrypted information about himself. Three of the four cryptograms still remain undeciphered.

The Zodiac committed murders between December 1968 and October 1969. According to the statements of the Zodiac itself, the number of his victims reaches 37, but investigators are sure of only seven cases.

During the investigation, many suspects were named, but there was no conclusive evidence linking any of them to the killings. In the California Department of Justice, the Zodiac case has remained open since 1969 to this day.